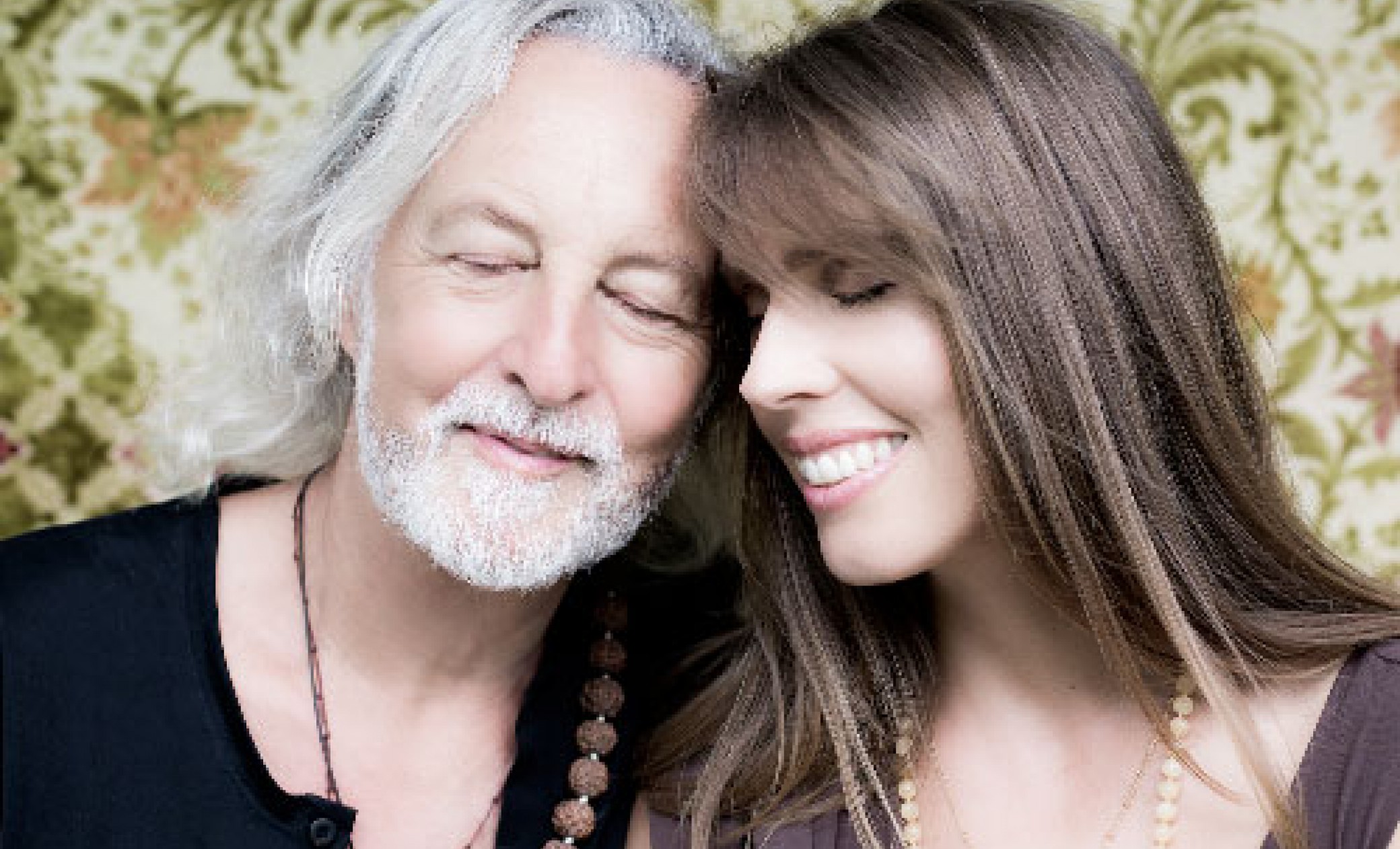 In 1997 I was working in the kitchen at a music festival in Osho Leela in Dorset.

I was incredibly new to the world of Osho and there was a lot of hype about Miten and his girlfriend Deva Premal performing in concert. I wasn’t sure what all the fuss was about and when someone asked me if I was going I replied probably not as I would be washing the dishes after dinner while the concert was on.

That night as I set to the dishes with the other kitchen crew we were inundated with helpers and were told to get the dishes done as quick as we could because the concert wouldn’t start without us.

As soon as the dishes were done we ran to the room where the concert was being held and as promised the concert hadn’t started and we were ushered to front row seats.

In all my working life I had never been treated like this. I couldn’t believe it and cried in gratitude the whole way through the concert.

We found out later it was Miten’s idea to wait and give us the front row seats. Talking with friends about the concert afterwards someone told me Deva Premal had been a vegetarian her whole life and I was in awe of how lucky she was to have been given that choice from birth.

Since establishing my catering business it had always been my dream to cater on one of Deva Premal and Miten’s retreats and this year that dream was realised. I asked Deva this year if I could interview her on being vegetarian and she agreed. We didn’t get it together to do the interview in person but Deva and Miten recorded their answers from Corfu earlier this year. I was once again overwhelmed with gratitude and spent the entire time listening to the interview in tears. I feel so excited to be sharing with you their answers to these questions about being vegetarian for life. I hope you enjoy them as much as I did.

How long have you been vegetarian?

Deva: I’ve been a vegetarian ever since I was born, which is forty five years ago.

Miten: Me about the same amount of time, about forty years ago I became a vegetarian.

Why did you choose to be vegetarian?

Miten: I just never liked meat - simple. I was too young to ask why i didn't like it  - I just ate it out of a somnambulistic kind of attitude adopted in childhood. Once I realized I could make choices for myself I stopped participating in the murdering of animals.

Deva: I didn’t choose it! It was a normal day to day reality in my family. Although my parents always gave me the choice, like, to eat it in school etc, but I never wanted to try it. Fish either - Ive never tasted it. But my parents were great - they just made it clear that they wouldn't cook it for us, but you are welcome to eat it somewhere else, but, fortunately, I just never was attracted to it.

Miten: The wake up call for me was when I connected the dots between lambs and lamb chops! That was the breakthrough for me. Eating other people’s babies?...yuk...a horror story. The horror of doing that went really deep in me and still now when people - friends - mention lamb chops or such, I just get sick to my stomach: So, that really was a big one for me.

I also remember once, being in switzerland where we were playing and there was a farm opposite the venue. I saw a cow being separated from its calf and I saw the anguish and the freak out of them both..

In your life time have you ever been tempted to eat meat?

Deva: Never. I never felt I was missing out. I suppose because my parents told me I could eat it if i wanted. I didn't see it as if it was some big forbidden thing that I was missing out on and had to secretly try. But somehow the idea of crunching around on flesh just felt like a horrible thing to be doing. I guess that answers your question!

Miten: No, me too. In fact I don’t even like seitan. Anything that reminds me of meat like fake chicken nuggets and things like that turn my stomach a bit. Things that taste like pork? Hello!?

Have you ever had any health problems due to being vegetarian?

Deva: We haven’t. So far so good, so far so great.

Miten: Let's put it this way - I've only missed 2 days work in 23 years if you count the concerts we've had to cancel due to ill health. I'm a healthy old guy! 69 next year, and still exercising and travelling the world with our full on touring schedule - 24 countries last year. Of course, I have issues with the body as it gets older, but I'm strong in my spirit and as long as I continue to take care of my body I don't have any health issues around being a veggie.

Is it important to you that you are both vegetarians?

Deva: It is great. I am so happy that when we met that we both were vegetarian. When I came to Osho it was like coming home because the food in the ashram and in the communes was vegetarian. It was the first time in my life that I didn’t have to ask what I can and what can’t I eat when not with my family. Sadly, I got quite a shock in the later years, when meat began to creep in to the food. I took it for granted that everyone in Osho’s world was vegetarian. Not so! I found out that wasn’t the case at all - people just became vegetarians while living in the ashram. Once they were outside, many - not all - were into their preferences of chickens and pigs etc...and that made me sad and alienated from my 'sannyas' family at times. But then I met Miten, somebody who is so rooted in his outlook towards animals - that makes me so happy.

Miten: I couldn’t be with somebody who eats meat - that’s just the bottom line really.

Are there any social implications for you being vegetarian?

Miten: Sometimes I've thought to myself that I would like my friends not to eat meat when we go out together. The other day we were out to lunch with a friend and she ordered chicken, and basically I don’t really have a problem with it. It was ok. I watched her eat it and carried on talking and having a good time together. But I have to say it made me more careful about who I eat with when going to restaurants. I now take them for tea and (vegan) cakes instead!

Deva: Personally I don’t really like to watch when meat is very explicit on a plate like something obviously very meaty. Or when it’s smelly - for example, I especially find salmon or fish so disgusting that I can’t even imagine that somebody would want to eat it! But I also don’t like to make a rule that you can’t eat meat around me. I enjoy being more accepting of that because I know - deep down - we all do our best and we all have our addictions. It does disturb Miten but it doesn’t disturb me as much (apart from the salmon!).

As you travel the world do you experience any difficulty in being vegetarian?  Is it easy to eat out for example?

Miten: It's changed a lot in the past few years. I remember there being hardly anything for vegetarians in airports. Literally, nothing. The only thing you could sometime get was what they call a roast vegetable sandwich. If you were lucky. We always carry bags of nuts and seeds that Deva roasts before the tour. What we usually do as soon as we get to a city is we ask the promoter either for the local Indian restaurant or - even better - if they have a vegetarian restaurant or vegan restaurant. Also Italian restaurants are ok - you can always get some pasta and salad. The good news - and it was really a surprise on our last European tour - was to discover so many great vegan restaurants in the most unexpected places - Russia, Slovenia, Romania, Israel, Croatia...really hip restaurants with great food.

What is your favourite meal?

Miten: Easy - rice, dhal and Aloo Gobi...prepared either by Manose. or anything prepared by my friend DevaPriya - she was ashram food preparation guru - and she really treats us to the most amazing food whenever we visit her.

Deva: Personally I couldn’t say. I love so many different things from nice green, crispy fresh salads to  Indian food to Thai food to Italian food. I love the variety and I am happy I don’t have to restrict myself to one thing.

Do you have any words of advice or wisdom for anyone starting on the path of vegetarianism?

Miten: Enjoy the ride! - there is so much to discover - so many culinary - and spiritual - delights ahead. Vegetarianism is not a political statement - it's pure pleasure. If we do some good at the same time by not killing and eating our fellow travellers and their babies, then that's a bonus in itself.

Towards the end of the interview Miten also mentioned that Deva was a salad queen and made dressing that she inherited from her mum and that he thought it would be a great idea to publish a Deva Cook book. He said Deva cooks some great food and meals. I was quite delighted to hear Deva say that some of the recipes she cooks come from my cook book. You can imagine how fast my tears flowed after hearing that! I asked Deva if she could share one of her favourite salad dressings and she said a combination of balsamico herb salt olive oil and maple syrup. So here is a recipe I have been making which people who like a little sweet in their salads love.

Place in a jar and shake until combined. 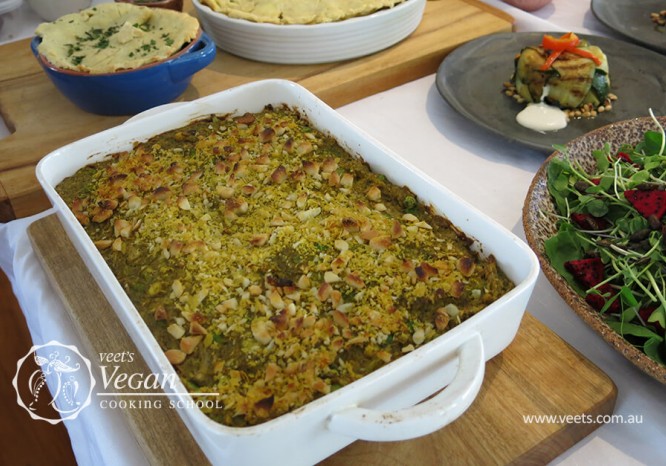 Jackfruit and Pea Mornay   Who has never had Tuna Mornay? Am I the only... Read more 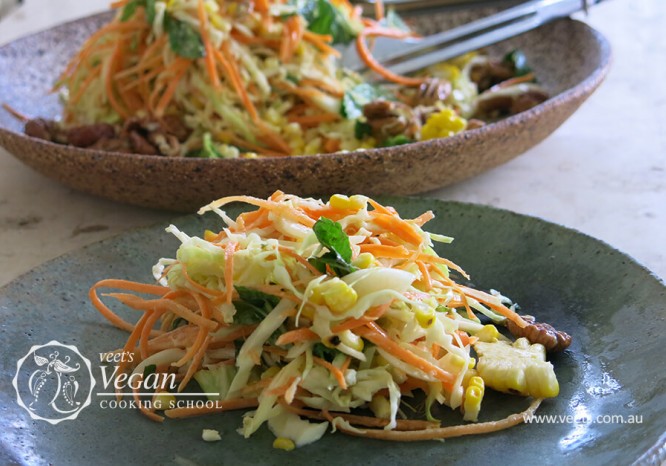 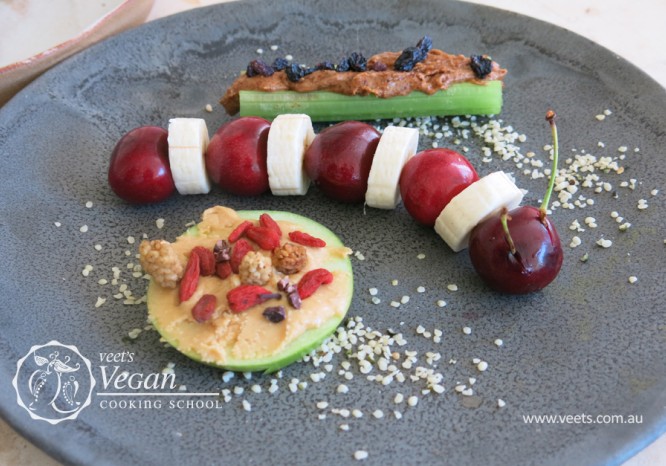